1st half 2015: 30% growth of revenue
► Acceleration in the number of surgeries performed
► International momentum confirmed 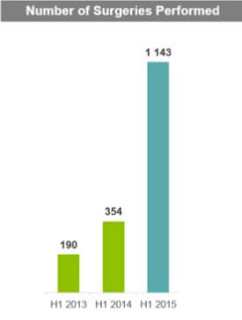 “The sharp rise in the number of surgeries in the second quarter of 2015 is a strong indicator of how our product has been adopted. We expect more robust revenue growth in the second half of the year, supported by distributors’ orders and sales of our new products, including the Auto-Adjust implant, which is due to be launched in the United States by the end of the year,” comments Yves Vignancour, Chief Executive Officer of Safe Orthopaedics.

International momentum confirmed
Safe Orthopaedics continued to expand in the first half of 2015:

In terms of revenues, the first half of 2015 saw growth of +30% to €1,300 thousand, including an increase of +97% in the United States and +84% in France, Safe Orthopaedics’ two main markets. This robust performance was achieved despite an unfavourable base effect in the second quarter in the rest of Europe, which benefited from the initial orders resulting from the signing of new distribution agreements a year ago.

Safe Orthopaedics therefore intends to continue with its growth strategy, primarily in the United States and by supporting the commercial development of its latest innovations, namely the new fenestrated screw for patients with osteoporosis and the Auto-Adjust implant to repair spinal fractures.

Marie Landel is a certified accountant who has been based in Boston since 1990, with extensive experience in helping French and European medtech companies in the United States, where she has large networks in financial and healthcare circles.

Next financial release: 1st half 2015 results on Wednesday September 16, 2015 (after market close)

About Safe Orthopaedics
Founded in 2010, Safe Orthopaedics is a French medical technology company that develops and markets an innovative range of sterile implants and associated single-use surgical instruments, with the aim of facilitating safer, optimized and lower-cost spinal surgery. By avoiding the reuse of surgical instruments, Safe Orthopaedics reduces the risk of infection, avoids the cumbersome and unreliable logistics of instrument sterilization, and limits hospital costs. Protected by 17 patent families, the company’s CE-marked and FDA-approved SteriSpineTM kits are already being marketed in 12 countries, in Europe and the United States. They are being rapidly adopted by surgeons throughout the world, with nearly 1,000 procedures performed in 2014 and 1,143 in the first half of 2015 alone. The company is based at Eragny-sur-Oise (France), and has 33 employees and a US subsidiary.